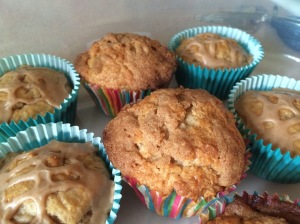 Most of the world’s cinnamon comes from Sri Lanka, but other countries – like Madagascar, China, Vietnam, and Indonesia – also grow and process this popular spice. My favorite cinnamon is Vietnamese, which has a slightly more spicy flavor than your average, from-the-grocery-store cinnamon. I purchase it at Penzey’s in Pittsburgh’s Strip district, along with Mexican vanilla extract and Tahitian vanilla beans for the baker’s version of a splurge.

These muffins include Vietnamese cinnamon of the “extra fancy” variety – and yes, I keep both this and regular, from-the-grocery-store cinnamon in my pantry. I’m a generous measurer of cinnamon as well, so if you’re looking for a more mellow flavor, you can always cut back a bit.

These muffins are prepared two ways; first with what the original recipe called a streusel topping, which I expected to be more crumb-like but turned out to be more of a crunchy coating, and second with a cinnamon vanilla drizzle. Whatever you choose, you won’t go wrong – or if you’re feeling really adventurous, do both! I chose to put the streusel crunch on the first batch, and went with the glaze on the second batch because some of my streusel crunch-coated muffins burned at the edges a bit. When dropping your streusel crunch pieces onto your muffins, be careful to keep them as close to the center as possible, as they can spread and burn. Note: this recipe yielded 20 muffins.

Streusel Crunch (makes enough for all of the muffins)

Make the streusel crunch: in a small bowl, combine flour, brown sugar, and cinnamon. Cut in butter, or rub in with your hands, until the mixture comes together; the original recipe said this would go crumb-like, but that didn’t happen to mine. I had to pull it apart and place drops of it on the muffins, rather than sprinkling it.

Make the muffins: in a large bowl, combine flour, sugar, brown sugar, baking powder, cinnamon, and salt. Make a well in the center.

In a large glass measuring cup, combine milk, melted butter, vanilla, and egg and whisk to combine. Pour into the well in the dry mixture and mix until just combined and no dry streaks remain.

Bake for 18-2o minutes, until a cake tester comes out clean. Remove from oven and immediately remove muffins to a wire rack to cool completely if glazing.

Make the glaze: in a small bowl, combine powdered sugar and cinnamon, stirring to combine. Add vanilla extract, then add water about 1/4 teaspoon at a time to reach a drizzly consistency.

Drizzle over cooled muffins; I placed my drizzle in a small zip-top bag and piped it on, but ypu could just drizzle it with a spoon.