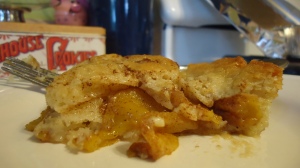 A few weeks back, I whipped up a peach cobbler from the peck of peaches Mike brought home from his new job as a jack of all trades at a local family farm and orchard.  I meant to post this at the time, then things got super-busy for us, as I also accepted a new job, which I am starting tomorrow.  In any case, both peaches and cobbler make me think of the South, so this recipe presented a good opportunity for me to talk about where Mike grew up, in St. Mary’s County, Maryland…or as I like to say, “oh way down south in Dixie.”

About 40 minutes south of Washington, DC, as far south as you can go on the Western Shore of the Chesapeake Bay, St. Mary’s County is beautiful, mostly flat with the gentlest of rolling hills, surrounded by water from the Bay to its east and the wide, graceful Potomac River to the west.  Most people don’t think of Maryland as the South, but St. Mary’s County is very Southern, in manners, in cuisine, and in culture.  Everyone says hello.  Stuffed ham, barbecue, and pie are gastronomic requirements.  Farms abound, growing soybeans and corn and politically incorrect tobacco.

During the Civil War, when Maryland reluctantly sided with the Union, the residents of St. Mary’s County were disinclined to acquiesce, pledging allegiance to the Confederacy and earning the nickname “Little Dixie.”  The Union was not amused.  Intent on giving the rowdy locals their comeuppance, Union troops commandeered Point Lookout, at the southernmost tip of the county, to serve as a camp for Confederate prisoners of war.  Those under arrest could gaze across the Potomac at Virginia; many died trying to swim back home.

I imagine that wives on both sides of the Mason-Dixon line made desserts not unlike this one, and suspect that the bakers of St. Mary’s County would enjoy it as much as Mike did – they may even add a bit of vanilla ice cream on the side of a warm cobbler.

Pour melted butter into the bottom of a 9×13 baking pan.

Pour batter evenly over top of the melted butter – do not mix together.

Spoon peaches evenly over top of the batter – do not mix together.

Bake for 35-40 minutes, until the top is golden brown.