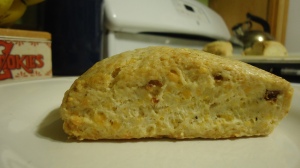 On Route 108 in Highland, Maryland, sits Boarman’s Meat Market. In times past, every community had a market like Boarman’s; a place where the cashiers knew your name (and likely, your business), the butcher wrapped your freshly-cut meats in thick brown paper, the vegetables were grown in your neighbor’s fields, and the fruits arrived from a nearby orchard.

There is no bacon in the world finer than Boarman’s, which cooks and tastes better than any bacon I’ve ever had. During Clarksville Picnic weekends, Aunt Liz has been known to dispatch Mike or Robb with a crisp $20 and instructions to “run and pick up another pound…or two.” Since last summer’s Clarksville Picnic, which was unfortunately canceled due to the biggest thunderstorm in years, I’ve wanted to bring back some Boarman’s bacon and use it in a scone. Last weekend Mike went to Maryland and returned with a cooler, in which two pounds of Boarman’s bacon sat waiting, wrapped in thick brown paper.

Next time, I’d increase the amount of cheddar in this scone, perhaps by as much as another cup.

In a large mixing bowl, sift together flour, baking powder, sugar, and salt.

Add butter, cheddar cheese, and salt and cut in with a pastry blender, then blend with your hands until lumps form. You want the mixture to be similar to the coarse-crumb stage of pie crust.

Add bacon and 1/2 cup heavy cream and blend with a spoon. Add 1 tablespoon of additional cream at a time, blending the dough with your hands, until a sticky dough forms.

Dust counter top with flour and turn dough out, patting into an 8-inch circle that is about one inch thick.

Cut into wedges and place on baking sheet, at least one inch apart; brush tops with additional heavy cream.

Remove from oven and cool for a few minutes before serving.

One thought on “Bacon Cheddar Scones”