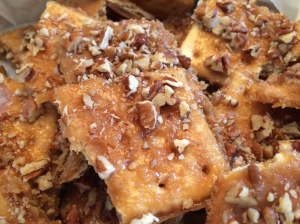 Recipes for this treat – which has various names, including “Christmas Crack” – are everywhere. My Aunt Liz makes a version that she calls pecan pralines, involving graham crackers, toffee, and pecans. I didn’t have enough graham crackers to make that version, so I’ve used the standard saltine instead.

The great thing about this treat is that it can be customized however you like. I’ve created both a plain, toffee and pecan-only version and a chocolate version, the photo of which appears below. You could add toffee bits, butterscotch chips, various nuts, or other candies if you’d like.

The non-chocolate version is for my mom, who will be coming to Christmas dinner later today. She’s been known to arrive at my house after running various errands in need of a snack, and her go-to question is always “got any crackers?” Merry Christmas, Mum.

Note: the following recipe creates a “half and half” pan of toffee saltines – half with chocolate, and half without.

Preheat oven to 400 degrees. Line a rimmed baking sheet with foil and spray very lightly with cooking or baking spray.

Place crackers on the baking sheet in a single layer.

Remove from heat and pour over crackers, spreading carefully with a spatula to fully cover.

Allow to cool completely before breaking into pieces. 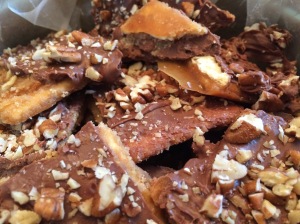