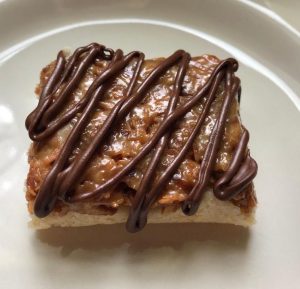 Back when I still ate chocolate, I loved Girl Scout Samoas. Today I wanted to recreate them in bar form, and I found this recipe from Just a Taste. Truth be told, I found it more difficult to work with than I’d hoped, so I think I’ll try a different recipe next time.

I do have some suggestions, based both on the comments on the original post and my own experience. I think you could decrease the amount of coconut by at least 1 cup, and you could likely increase the amount of caramel as well. Another baker suggested mixing the coconut into the caramel, rather than pouring the caramel into the coconut, then keeping the mixture warm in the double boiler and adding it to the base a little bit at a time. Also, the base is very crumbly, so I chose not to dip the bottoms of the bars in melted chocolate; I used far less than the original recipe required. Despite being a bit difficult to work with, the bars turned out to be delicious. Mike decided he’s keeping them instead of taking them to work, and I even left a few without chocolate for myself.

Preheat oven to 325 degrees. Line a 9 x 13 pan with parchment paper, extending the paper over the sides.

In a medium bowl, combine flour, baking powder, and salt; set aside. Cream butter and sugar until fluffy, then slowly add the flour mixture and beat on low speed until the dough comes together. Press into the bottom of the baking pan and bake for 15-18 minutes, until just slightly golden. Cool completely.

Preheat oven to 350 degrees. Place coconut on a rimmed baking sheet and toast until browned, stirring frequently; this takes about 10-12 minutes. Keep a close eye on your coconut, as it can burn easily. Pour into a bowl and set aside.

Place caramel bits, milk, and salt in a heatproof bowl over a pan of simmering water or in the top of a double boiler and stir until caramel bits have completely melted; this takes several minutes. Stir together melted caramel and coconut and quickly pour over the base, spreading it as evenly as you can; I used a sheet of parchment to press the caramel/coconut mixture onto the base to help it stick. Allow to cool for 30 minutes, then lift out of the pan by the parchment and cut into 2 x 1 bars.

Melt chocolate chips and place in a piping bag fitted with a plain tip (or in a zip-top bag, then snip the corner) and pipe chocolate over the bars. Allow to set before serving; store in an airtight container at room temperature.

One thought on “Samoa Bars”