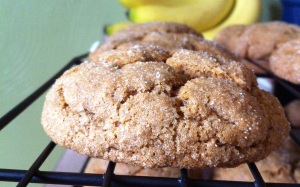 My kitchen smells so amazing right now that if the Yankee Candle folks could be here they’d create a candle based on it. I almost called these treats Pumpkin Dreams, because their original title didn’t quite seem to capture their aromatic deliciousness; I also considered calling them Septembers, because they’re an excellent combination of fall ingredients.

I will readily admit that I ate one the moment it was cool enough to consume without burning my mouth, and they are among my favorites, ever, which is really saying something.The perfect marriage of a pumpkin cookie and a gingersnap, they are spicy and sweet with a crunchy outer edge and soft, pillowy center.

The triple threat in these treats is the combination of pumpkin, molasses, and the spice blend of cinnamon, ginger, and cloves. Each ingredient highlights the next, so you get layers of flavor; the spicy sweetness of the cinnamon and the pumpkin, the rich and slightly bitter molasses and cloves, and the light zing of the ginger. This cookie is an excellent example of how certain flavors can bring others out, in the best of senses. Next time, I may toss in a bit of nutmeg into the mix and see what happens.

In a mixing bowl, cream butter and sugar until fluffy.

Add pumpkin, molasses, egg, and vanilla and beat until combined.

Cover and chill dough for about 1 hour, until easier to handle.

Using a 2-inch cookie scoop, scoop dough and roll into balls, then coat each ball very well in sugar and place about 2 inches apart on the baking sheets.

Bake for 13-15 minutes, until edges are set and centers are puffy. Remove from oven and cool on baking sheets for 5 minutes before removing to a wire rack to cool completely.