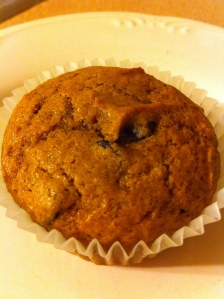 Last weekend, our friends Kash and Mandy got married. They’re an interfaith couple like we are, being Muslim and Christian respectively. Mike, my Jewish husband, was their celebrant; it was a lovely wedding, one of the most fun I’ve ever attended. At the reception, there was a traditional Pittsburgh cookie table, and I was happy to be able to bake some pumpkin chocolate chip cookies to contribute to it.

I had a cup of pumpkin puree left over, which I’ve been keeping in the fridge and wondering how to use. This recipe was a great solution, requiring exactly one cup of pumpkin. I did adapt it slightly, because it originally called for pumpkin pie spice and I don’t keep that on hand. Fortunately, cinnamon, allspice, ginger, and nutmeg can be mixed together to create pumpkin pie spice, and you can adapt the ratios depending on your preference. I chose to do equal half-teaspoons of each spice, with a extra dash of cinnamon.

An interesting aspect of this recipe is its use of melted butter, rather than oil, as the fat. Most muffins require vegetable oil or applesauce, rather than butter, which I always think of as more of a cupcake ingredient. Regardless, the end result is a moist, fluffy muffin that has a nice spicy flavor and just the right amount of sweetness from the chocolate chips. I used semi-sweet, but bittersweet would be a good choice as well.

In a small bowl, whisk together melted butter, eggs, and pumpkin; add to dry ingredients and stir until well-combined and no dry streaks remain. Stir in chocolate chips.

Using a two-inch cookie scoop, scoop batter into prepared cupcake tins, filling each cup about half-full. Bake for 16-18 minutes, until a cake tester inserted in the centers comes out clean.

Cool on a wire rack or serve warm.