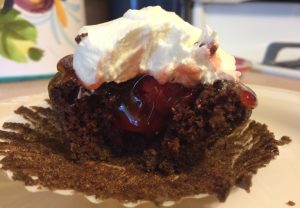 My cube mates and I all have nutcrackers on our desks for the holidays. Because we’re writers, we’ve decided that these nutcrackers need personalities and back stories. My nutcracker, Karl Henrik, hails from a tiny hamlet deep in the Black Forest…which made me really want to make Black Forest cupcakes.

This treat is much more fun to say in German: Schwartzwalder kirschtorte. Technically, this recipe is a very American adaptation on the German classic; it uses a dark chocolate cupcake recipe I’ve baked many times before, cherry pie filling (because one cannot find fresh tart cherries in Pittsburgh in December), and a kirsch-flavored whipped cream frosting. Mike proclaimed this cupcake delicious, whether it’s true to the original recipe or not. Someday, I’ll make a real Black Forest cake, but for now these treats will do!

*You’ll need half of a 21-ounce can; you can reserve the other half, as well as your cupcake cores, for a cherry chocolate trifle later on.

Place vinegar, vanilla, and vegetable oil into the wells; add water and mix until the batter is smooth. The mixture will bubble up slightly when you add the water, so just keep mixing until you get a smooth consistency in the batter, which will be fairly thin.

Bake for 13-16 minutes, until a cake tester comes out clean. Immediately remove cupcakes to a wire rack to cool.

Once cupcakes are completely cool, use a small knife to cut into the center of each cupcake at a 45-degree angle, about 1/8 inch from the edge, all the way around. Remove the core and reserve for another use (like a cherry-chocolate trifle, for example).

Spoon cherry pie filling into each center, being careful not to over-fill (which I definitely did). You should be able to fit about two cherries in each.

Fit a piping bag with a large plain tip and pipe frosting onto cupcakes; gently smooth with an offset spatula to cover most of the top of the cupcake.

Store in an airtight container in the refrigerator for up to 2 days.