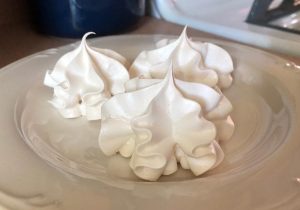 Last night I had three leftover egg whites, but not the energy to make macarons. So I made meringues instead, and now I wish I’d just gone ahead and made macarons because, truth be told…I’m not that big a fan of meringues.

Yes, yes, I totally need meringue practice. It’s good to work with things that aren’t as familiar, and I admit that the combination of egg whites, salt, cream of tartar, flavoring, and sugar that becomes an ethereal cloud of meringue-ness is something with which I need much more experience. But flavor and texture-wise, they’re not something I’d necessarily choose if there were other treats nearby.

In a mixer fitted with the whisk attachment, beat egg whites, almond extract, cream of tartar, and salt on low, then medium speed, until foamy. Slowly add sugar 1 tablespoon at a time, whipping on medium-high speed between each addition. Continue adding the sugar slowly and whipping until meringue is glossy and forms stiff peaks; this can take about 7-10 minutes.

Fit a large piping bag with a star tip and carefully spoon meringue into the bag; you don’t want to knock all the air out of it. Pipe meringue onto parchment in 2-inch blobs, leaving about 1 to 1 1/2 inches between each cookie. They won’t spread, but you want enough room for the heat and air to circulate around them.

Bake meringues for 40-45 minutes, then turn off the oven and leave them inside for another hour. Remove from oven and cool on baking sheets; store in an airtight container at room temperature.

One thought on “Almond Meringues”