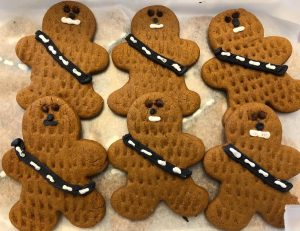 Whenever people tell me they’ve never seen Star Wars, I’m shocked. This iconic cultural phenomenon was a staple in my childhood, and I simply can’t imagine living a life without knowledge of its details. I assume nearly everyone is aware of it from pop culture, but if you haven’t actually seen it, you really are missing out.

Tomorrow is May 4th, also known as Star Wars Day, and to celebrate I’ve baked some wookie cookies. While I don’t think they look much like Chewbacca and I already have plenty of ideas about how to improve them for next time, the cookies themselves are delicious. The gingerbread recipe comes from Sally’s Baking Addiction, though I chose to go with dark brown sugar in my dough, and the decoration is a combination of chocolate chips, royal icing, and a very thick glaze icing. Stay tuned for more wookie recipes in the future, and may the force be with you.

For the royal icing

For the white icing

To make the dough, in a large bowl, combine flour, baking soda, salt, ginger, cinnamon, allspice, and cloves; set aside.

In a mixer fitted with the paddle attachment, beat butter, dark brown sugar, and molasses on medium speed until fluffy. Add egg and vanilla and beat on high speed for 2 minutes, scraping down the bowl a few times. With the mixer running on low, slowly beat in the flour mixture. Dough will be very thick and sticky. Divide into two portions and flatten into discs; wrap in plastic wrap and chill for at least 3 hours.

Preheat oven to 350 degrees; line several baking sheets with parchment paper. Unwrap one disc of dough and place it on a floured surface; this dough is very sticky, so you need plenty of flour for your work surface, rolling pin, and hands. Roll dough to 1/4 inch thickness and cut using a gingerbread man cutter. Place cookies on baking sheets and use a fork to make the impressions for the fur, then add miniature chocolate chips for eyes.

Bake for 10 minutes, until edges are set. Remove from oven and allow to cool on the baking sheets for about 5 minutes, then place on a wire rack to cool completely.

To make the royal icing, combine meringue powder, powdered sugar, and water in a mixer fitted with the whisk attachment and whip at medium, then high speed, for 7-10 minutes until the mixture is glossy. Add black food coloring to your desired shade.

Fit a piping bag with a small plain tip and pipe on noses (I also did some black mouths, but didn’t like those as much), then swap out your tip for a flat or fluted tip and pipe on the sashes.

To make the white icing, combine powdered sugar with enough water to make a thick icing that you can still pipe. Place in a piping bag with a small plain tip and pipe on mouths, then add the white decorations to the sashes.

Allow icing to harden before storing between layers of waxed paper in an airtight container; store cookies for up to 2-3 days. Makes about 40 cookies.