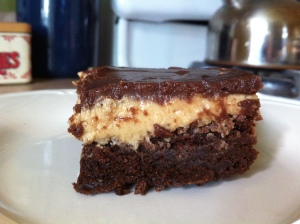 As a woman who firmly believes in slathering peanut butter on brownies, I was delighted to learn about the buckeye brownie from one of the gals in my office. She’d had one last weekend and described it as the best dessert she’d ever eaten. How can you go wrong with a fudge brownie, topped with a peanut butter layer akin to the center of a buckeye and a layer of chocolate over that? You simply can’t.

Most buckeye brownie recipes I found online called for (gasp) boxed brownie mix. I couldn’t bring myself to use a boxed mix, so I sought a recipe that used vegetable oil, not butter, for the brownie layer. As with cupcakes, vegetable oil yields a moister texture in brownies, and because that’s what is typically called for in boxed mixes anyway, I set out to create my masterpiece.

The recipe below is a hybrid of several scratch-made buckeye brownie recipes, and was very easy to make. I took these into work today for the farewell lunch of another one of the office gals, and they were definitely a big hit. Bear in mind, they are very rich, so small portions are all you need.

For the brownie layer

For the peanut butter layer

For the chocolate layer

In another bowl, combine vegetable oil, eggs, and vanilla; beat lightly to combine, then pour into the dry mixture. Stir well to combine, but be careful not to over-mix. You want all of your dry ingredients to be absorbed, but your batter doesn’t need to be completely smooth; it will thicken and become shiny when it’s ready.

Pour batter into prepared pan and bake for 20-25 minutes, until a cake tester inserted in the center comes out clean.

In a mixing bowl, combine butter and peanut butter and beat on medium until smooth, about 2 minutes. Add powdered sugar and beat until totally incorporated.

Spread peanut butter filling onto cooled brownies, smoothing out with a small offset spatula to create an even layer.

In a medium saucepan, combine butter and chocolate chips. Melt slowly over low heat, stirring to combine; mixture will thicken as it melts.

When chocolate is completely smooth, immediately pour over peanut butter layer and spread with a small offset spatula to create an even layer.