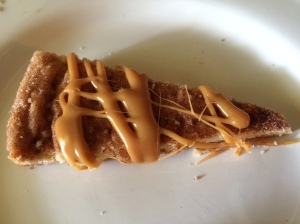 Cinnamon and caramel, together in shortbread? Trust me…it’s delicious. This is my second recipe from the King Arthur Flour Cookie Companion and it is, as promised, a surprisingly tasty result from an unexpected flavor pairing.

Shortbread is easy to make; you just need a few ingredients, and you can dress it up any way you like. In this case, we combine cinnamon and caramel, two flavors that don’t often go together but in this case work perfectly.

Just a few things to note about this recipe: I measured my flour by weight, using a food scale, rather than by volume this time. You’ll need 10 ounces of flour, which comes out to about 2 1/3 cups if you use the method recommended by the King Arthur Flour folks, which involves stirring up your flour to aerate it, then scooping it into your measuring cup with a spoon and leveling it. Also, I recommend drizzling each individual wedge on its own, rather than drizzling your entire cooling rack’s worth of wedges in long sweeps at once. The caramel cools fairly quickly, forming strings between the wedges that you have to cut with a knife to separate.

In a small bowl, combine 1/4 cup sugar and cinnamon; sprinkle the bottom of each pan with 1 tablespoon cinnamon sugar.

In a mixer fitted with the paddle attachment, cream together butter, salt, 3/4 cup sugar, and vanilla extract until fluffy. Add flour and beat to combine.

Divide dough in half and press into prepared pans, smoothing the tops with your fingers or the bottom of a measuring cup to create a smooth surface. Sprinkle the top of each round of dough with remaining cinnamon sugar, then prick the surface with a fork in whatever pattern you like.

Bake for 35-40 minutes, until edges are golden brown. Remove from oven and loosen the sides with a knife, then cool in pans for 5 minutes.

Carefully turn the shortbread out onto a cutting board and cut into wedges; I cut mine into 16 wedges each. Cool wedges completely on a wire rack.

In a small saucepan, combine vanilla caramel candies and heavy cream, stirring until the caramels melt and the mixture is smooth. Drizzle each wedge with caramel; if the caramel becomes too thick to drizzle, return it to the heat briefly to soften it.

Allow caramel to set before storing, and store at room temperature in an airtight container between layers of waxed paper.