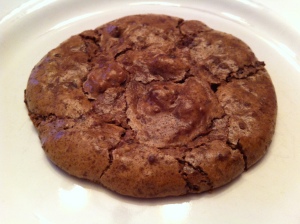 Several folks in my life are gluten-free, so it’s been interesting for me to experiment with gluten-free baking. Thus far, my gluten-free endeavors have centered in the macaroon/meringue world, including today’s dark chocolate meringues, but I do hope to branch out into non-wheat-based flours in the New Year.

I’ll admit that this recipe needs some work; it’s adapted from Ron Ben-Israel’s dark chocolate meringue recipe that was part of this year’s Food Network 12 Days of Cookies. And although I’m a huge fan of dark chocolate, this cookie is a bit too bitter even for me. I’m not sure how to tone down the bite in this cookie, but I’m certainly open to suggestions; so far I’m considering increasing the amount of nuts and perhaps using pecans instead of walnuts, and maybe using a blend of milk and dark chocolates, rather than all dark. This is the beauty of baking, though…the possibilities are endless!

Melt chocolate in a microwave-safe bowl by microwaving in 30-second intervals, stirring after each, until chips are nearly completely melted. Remove bowl from microwave and stir until remaining chips melt completely. Allow to cool, but not to harden. Stir in vanilla. (Note: the chocolate thickened significantly after I stirred in the vanilla, so I kept stirring it to keep it smooth while the egg whites were whipping.)

Place salt, vinegar, and egg whites in a mixing bowl fitted with a whisk attachment and mix on medium speed until whites are foamy, about 1 minute. Add sugar in a steady stream with the mixer running and allow whites to whip to stiff peaks, about 4-5 minutes.

Stir about one-third of the whipped whites into the chocolate, then fold the combined whites/chocolate mixture into the remaining whites. It’s important to note that you want to keep the mixture as light as possible, but you do need to fold more firmly than you would normally in order to incorporate the chocolate mixture properly.

Fold in walnuts, then place the dough into a large resealable plastic bag (or pastry bag), snip off one corner, and pipe the dough in 1 1/2 inch circles on the parchment-lined baking sheets.

Bake both batches at once, for about 12 minutes. Cookies are done when the tops are shiny and cracked. Allow to cool for 10 minutes on baking sheets, then cool completely on a wire rack.